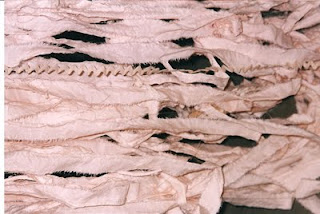 As this time of the year approaches, I always think about the days I spent in college making. It was my one and only job for almost four years. To make and be creative. At the time I knew it was a once in a lifetime experience, but I never appreciated how incredible that time was. When your life revolves around the ideas that come and experimenting with them until you find one that is worth carrying out. As I was becoming an adult, I was also exploring every possible medium at my fingertips that interested me in the least bit. Somewhere in my sophomore year I came up with a weaving technique that described the way I have felt my whole life, in a visual way. I spent hours and days ripping fabric and found materials, sewing it into "yarn" and weaving it. It got to a point where everyone started looking at rectangles with "tails" as a person. The pieces told stories with the materials that composed them. I became comfortable with the method and the appearance. The titles added the bits of sarcasm and gave the works a point of view. Then one day my life got turned upside down, and I put my emotions behind me, and finished the last piece that I ever made on a floor loom.
I have spent the past 4 years, dealing with demons. Making, but always feeling like something was missing in the work. So I began to think, and I remembered something that a professor once told me in a critique. "Once you are comfortable with what you are making, it is time to move on to something else."
The more I thought about this the more it made sense. Art, after all is just a series of problems and solutions. Once you know the solutions to the "problem" at hand you begin to repeat yourself. It is time to more on. So all summer I have been spending time doing things I may not have done in the past, trying to broaden my horizons. I have spent time outdoors, even took up tennis (I am no good, but none the less... tried.) I have had dinner parties, cooked more than the past 3 years. Gone for walks played in the sand and the river, and done absolutely nothing but think for an hour here and there (a hard thing for me). In this time the ideas began to come. I layed out things in a sketchbook, made some drawings, collaged images... Finally something new, that is not just a thing to pass the time away, came to mind. Something that has depth and concepts behind it.
As an artist my greatest fear is being the one hit wonder that never makes anything again. So here I am in the most public of all places, declaring that I am going to carry out my new idea. I am not going to share it because, well... the Internet is a scary place to leak a new idea. I will post photos as a record of the process, because the process is as important as the work for this piece. Thank you to anyone that reads this for being patient with me, I know that some of the things being made and talked about have lacked something... I am hoping that from now on it gets more interesting, for us both.
Posted by Ana Conceicao at Wednesday, August 19, 2009 1 comment:

Ana Conceicao
Richmond, Virginia, United States
I think it began with the box of crayons and playdough I was given as a child. The colors and smell of it, had me hooked. Some of the first memories I have include "making" in one medium or another. Sometimes it was some stones and dirt to make a "house" in the woods, other times it was a marker to color my Barbie's hair with. Ever since then I have never been able to stop my hands, my mind, my eyes from thinking, feeling and acting as an artist. I graduated with a BFA from VCU in 2005. I majored in crafts with an emphasis in textiles. While fiber will always seduce me, I use different mediums depending on the project. At the present time I am back in my studio getting focused, and letting myself be vulnerable enough to make raw, un-edited work. Textiles is traditional "women's work" and I am doing everything in my power to make it "a contemporary women's point of view".