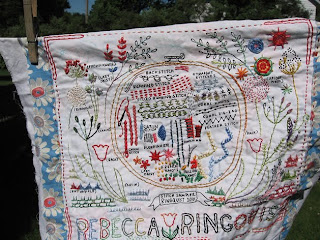 This summer has been filled with change, experience, and moments shared with some very important people in my life. There was a big move (almost sent me over the edge), a wedding, two new babies, some trips to the ocean, some laughs, some tears, and some room for growth. Through this time my mind has been making what my hands have not had time to do. Finally things calmed down a bit and I started playing with some thread and needles. I have been fascinated by traditional embroidery samplers as long as I can remember. It is an organized way to show different stitches and embroider something as simple as a letter or a number.
With one of the new babies that came I made a quilt, back in the winter, under 3 feet of snow! For the newest little one added to my circle of friends, I decided to make an alphabet sampler. This baby already has two brothers, so she had everything she needed including some quilts, I thought the alphabet sampler would be a fun piece to hang on the wall that the brothers could learn from too. I am using all different fonts, stitches and colors, on a piece of feed sack I have lying around. I am about half way through it and it looks like it belongs in a nursery already.
Sometimes making for me is about a concept, that has many layers and meaning, and others it is about people and the idea of giving a handmade object as a keepsake. After all that is what history is made of.
Some other things have been brewing in this studio as well. A new collection of quilt "fragments" has appeared and when the sampler is done, a new "quilt" project will be tackled. 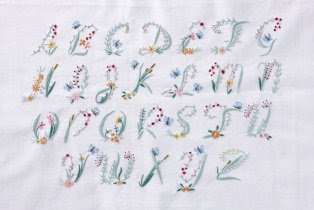 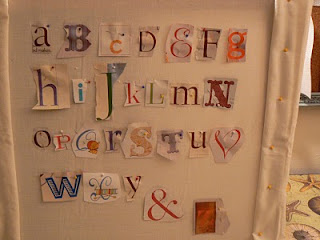 This is with the letter layed out, not yet embroidered. I am about half way through- photos to come!
Posted by Ana Conceicao at Tuesday, September 14, 2010 No comments: 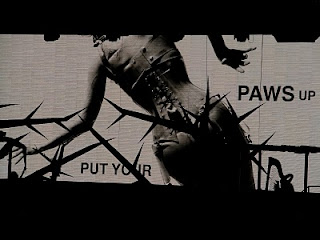 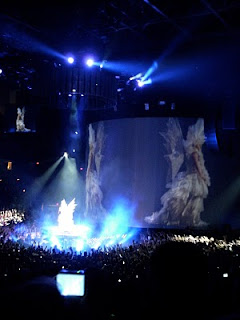 Last week I went to my second Lady gaga concert. I think she is an amazing artist with an open mind, that is not afraid to put out into the world the fantasies that exist in her mind. I enjoyed seeing the show again, the costume changes alone, are worth the ticket. Like most modern artist she pulls from all aspects of pop culture new, and old. There were influences from Madonna, clearly one of the best artists of all times. Even some influences from the wizard of oz, with the trees and tin person. A show worth seeing!
Posted by Ana Conceicao at Tuesday, September 14, 2010 No comments:

Ana Conceicao
Richmond, Virginia, United States
I think it began with the box of crayons and playdough I was given as a child. The colors and smell of it, had me hooked. Some of the first memories I have include "making" in one medium or another. Sometimes it was some stones and dirt to make a "house" in the woods, other times it was a marker to color my Barbie's hair with. Ever since then I have never been able to stop my hands, my mind, my eyes from thinking, feeling and acting as an artist. I graduated with a BFA from VCU in 2005. I majored in crafts with an emphasis in textiles. While fiber will always seduce me, I use different mediums depending on the project. At the present time I am back in my studio getting focused, and letting myself be vulnerable enough to make raw, un-edited work. Textiles is traditional "women's work" and I am doing everything in my power to make it "a contemporary women's point of view".